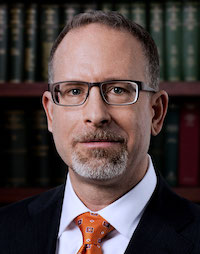 Over the last 23 years Ian Cooper has represented injured workers in medical treatment disputes, disability awards and denied claim appeals. Unlike many other Workers’ Compensation attorneys, Ian actually welcomes the opportunity to go to trial to protect injured workers’ rights, and consistently does so.

He has been selected by his peers for Martindale-Hubbell’s highest rating (AV) for legal ability and ethical standards.

He is a Certified Specialist in Workers’ Compensation Law by the State Bar of California Board of Legal Specialization.

Mr. Cooper earned his Juris Doctor from the University of San Francisco School of Law in 1992 and was admitted to the California bar the same year. He earned a Bachelor of Arts degree in 1984 from Humboldt State University.

Mr. Cooper is a member of the State Bar of California and the California Applicants’ Attorneys Association. He has been designated a Northern California SuperLawyer in 2015 and 2016 in the category of workers’ compensation.

Contact Us
Practice Areas
Client Reviews
★★★★★
“I live on the east coast. I needed a lawyer to represent me in a personal injury suit. Never having been involved in lawsuit before, I didn't know what to expect. I selected John Hill based upon my research of Bay area attorneys and was not disappointed. He and his staff were very easy to communicate with despite the distance and 3 hour time zone difference. They are knowledgeable and have a huge base of experience. Most of all, I was always treated with kindness and respect as we moved through the process. Needless to say, I am extremely satisfied with my settlement. Without reservation, I give my whole hearted recommendation to Mr. Hill and his staff.” Cathy Walls
★★★★★
“Intensely dedicated to getting the best results possible for me on several cases. John Hill tells you honestly and clearly the pluses and minuses of your case and makes sure you understand completely all options. He is completely professional and one of the most affable persons you will ever meet.” Dan Wilson
★★★★★
“They handled my case with no problem love how effective & efficient they were!” Aja Jordan
★★★★★
“I was represented by INNA BIMITS in a workers compensation case. She is the BEST!!! I couldn’t have had a better attorney than her. I highly recommend her to anyone in need of a workers compensation case. Her Assistant’s were very nice, helpful, and returned my calls right away. It was a long process but they were with me through it all. They were very patient with me explaining every process and gave me great advice. Inna gave me the best results possible and I am very pleased with her representation. Hiring her was the best decision ever.” K.C.
★★★★★
“Exquisite advice with Worker’s Compensation Case! This law office, all support staff, and assistants are responsive and helpful. I especially appreciate the legal advice and clarifications I received from Joanne Helvig, Esq. She is an excellent lawyer, fights hard, is thorough, provides great attention to every detail, sorted through financial bills, and got me through a long legal battle. I appreciate this great lawyer. As an injured worker, I got what I needed.” M.R.
View More
Submit a Law Firm Client Review